What USE is a UNIVERSITY degree?

You are here:
Uncategorized 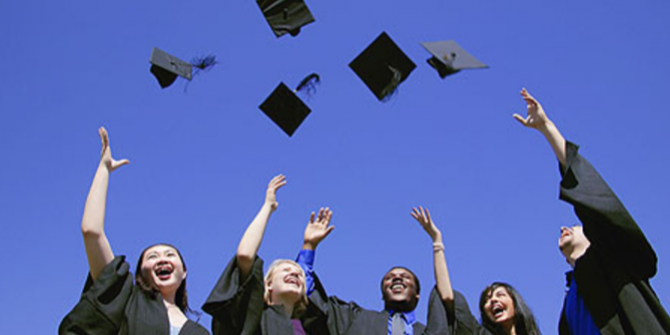 What use is a university degree other than being able to throw your hat into the air in celebration that the whole thing is over!!

When I was young (1000 years ago!), to have a university degree was really something. It meant that you were considered the game changers in society. Why? Because you had reached a level of intellectual excellence that would be able to shift and develop new discoveries in your field. It also meant that you would be the ones who would question and protest on marches to make political and social changes, and it also definitely meant that you would never be unemployed….    Why? Because you were one of the privileged view who showed you were more than average, more than capable in your field, because you were considered the cream of society!

I can vouch myself for almost everyone I have ever met who has a degree – if you ask them how useful the degree was to them in their work-life 95% of them will answer – it was completely worthless.

But … I do want to focus on one quality here, and this is the only thing I personally do accept as having merit for having a degree. A university degree from a recognized university does declare to a future employer that the person can complete something that has some intellectual demands to it, and reach a certain level of proficiency. Whatever topic it is in is irrelevant.

This is backed up by another point that needs to be mentioned. In the past (50 years ago or more), University degrees were not about getting a job. They were about developing an enquiring mind so that the society in which the people lived would always have a few ‘degreed’ people in every group who would question things to ensure that the democratic process was going to continue and all things that were fair and equal would be applied on all things. That human dignity was at the heart of any societal discussion and that corrupted leaders could not fool the uneducated masses and incompetent administrators wouldn’t be re-elected. This position in society was considered a distinguished lofty role given to a chosen few who had achieved a high level of intellectual questioning excellence.  That was the role of the university degree. (See this interested Tedtalk on this topic in more depth. https://www.youtube.com/watch?v=ybYuN8vV2Zs)

This I do agree with, because I think nowadays we have put far too much emphasis on universities as ‘vocational’ institutions whereas they were never meant for that – they were only meant to be ‘intellectual’ institutions, to raise those questioners in society.

Well now there’s a lot of cream at the top holding that lofty position – so much so that to have a Bachelors Degree is now virtually worthless. The only thing that would be considered a worthwhile University education would be Masters or more. But even this is now going out of date. Or even worse, if you get a PhD it can actually put you at a disadvantage for getting a job. People today don’t want to employ a Dr at a low level position, and yet that’s really where they would need to start. So they don’t even get the chance to get an interview. They will not even be shortlisted. Many Dr people today don’t even put it on their CV anymore because they know people won’t like it.

The concept of a university degree representing a questioner and thinker, has died. The chances of going to university has now not been based on how much intelligence you have but how much money you have. Therefore the rich get the chance and the poor – still get the chance, but have to pay off their loan for the next 30 years. The equality in the society hasn’t changed – it’s just rearranged itself – the rich are still rich and the poor are now poorer, in greater debt and less likely to become questioners as the last thing you would want to do after you’ve paid a lot of money for something – is to question it….

Today people are being recommended to NOT go into the university system and often this is against their parents wishes. For many parents who never were considered the cream of the crop and had to work the hard labour jobs to feed their family, are excited by the prospect that their son or daughter is going to graduate with a degree.  The sad point is that all that money the student may use to get this degree is going to be spent for nothing. What you get from a traditional university will be worthless. Why? Because university degrees today bare little or no resemblance to a real workplace situation not do they nurture that prestigious position of being those places that ensure the questioners of societies problems have their say and make a difference.

At the same time I can see, there are some universities who are making changes. Making work experience an important course in the university degree, and offering group task based learning to create new ideas a practical part of the course. But the core of the problem is not necessarily the university. It still comes back to the student. They have to demand a creative approach and stop being stuck in the world of university arrogance, where pompous knowledge acquisition is power and regurgitation at exam time is recognized as the only true indication of what someone knows. It is the students who have to say that they want to have to chance to speak up, to ‘rock the boat’ and to facilitate societal change. The students should not feel locked down into a lifetime of debt repayment just because they wanted to have a chance to question something.

To get back to the old university’s role of developing the learned enquiring mind is critical if we are to face the future challenges of education. Forget about Universities being about ‘jobs’, make it more about learning how to discover, breaking new ground and get back to the notion that it should always be about ideas, freedom of mind and forward thinking, but this time without the arrogance and far more collectively.

Let Universities be what they are supposed to be – to develop democratic decision making, create civilized worlds, and be forces of change in society, pushing boundaries of thought, work and future innovation. This is the only way the university degree will have any meaning in the future.

GENEROSITY is a connector – Choose to be GENEROUS with your English
October 12, 2018
Go to Top